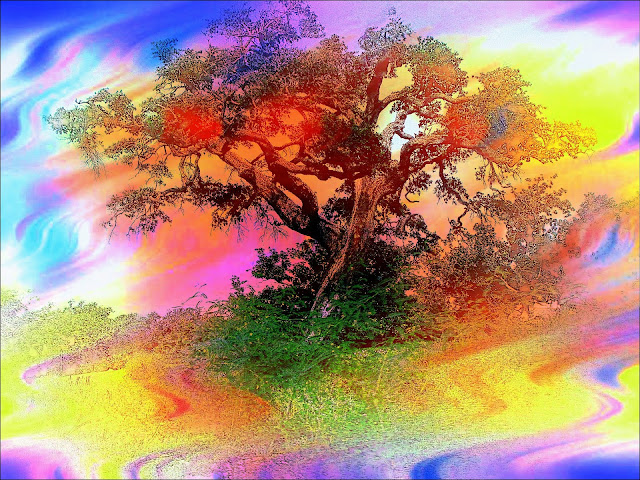 “The light knows not darkness, for everywhere it goes, there is light.” – The Ancient One

Coming along the base of the massive cliff range, wedged between the high rock walls and the river, Biella walked with the Group. “I brought you here, far from everything, to tell you a story, a particular fable. Not a typical tale. This one has to be watered:”

The Ancient One and His Grave

I watched him as he sat there on the bench.
I, the Solitary Tree, him, The Ancient one.
There I watched him, on that bench in the middle of nowhere, in my shade. I watched him, day after day, as he sat there, holding time. Waiting. Waiting for what knows who. I watched him watch the horizons. I watched him watch his grave.
He had dug that grave so long ago. Even the shovel had long since disappeared. But the grave stayed open. Waiting for the Ancient One. Watching him.
I watched them. Waiting. I knew not for what, but I waited. Waiting is Me – for I am the Solitary Tree.
I did not see the others come. How they crossed the plains to come toward the bench, I know not, but they had come. Two angels, dressed as nuns. They sat down beside him, each taking hold a hand. The Ancient One transformed…. 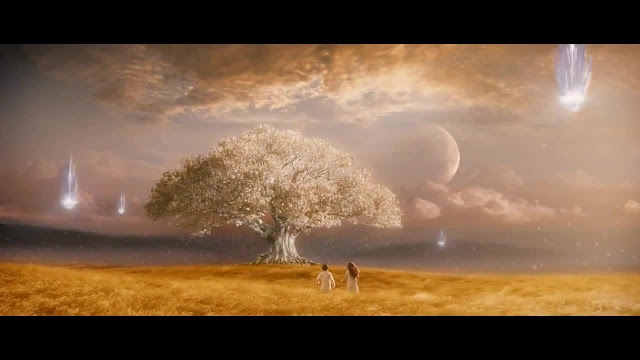 *
“Behold!” I did spake. I am ancient, I am the one waiting. “Behold, angels, behold what thee doth do.” They did not hear me. They did not hear me yet. Perhaps I did need speak a more recent tongue. “Know this angels, that on this day, in this hour, you have meant more and done more for me than any my entire life. For this I have been waiting.”
They did not comprehend. Their simple act, simple to them, profound to me. “A seed,” I did say. “A seed.” Perhaps they did think me addled, yet they listened. “Whence comes the seed?” They look upward, into the mighty tree rising into the heavens above. I shook my head.
“Watch,” I commanded. My stare to the horizon. Staring into the soft breeze coming toward us I directed with my eyes. I still had some power. They saw the speck, the speck on the horizon. I went in, closer, and closer still. They saw the tiny seed, saw it coming over the horizon. That kernel of promise carried ever so gently by the breeze. Potential Goodness carried for so long by destiny.
I opened my hand, releasing it from the angel to my left. I placed it on my knee, palm beckoning to the sky. We sat still. Watching. Watching and waiting. We watched that seed. Closer and closer it drifted. I held my hand. It would come.
Come it did. Landing delicately in my palm as the breeze died. A foretelling. There was the seed. On my palm. “Whence comes this seed?” I asked the angels again. They felt the Solitary Tree. They felt the horizon, they felt the World, but they were unsure. I smiled.
“I have been waiting for you,” I promised these hearts. “Know this angels, your simple act is a seed. It has grown in me. It grows in me. It will grow in me. You do not see. But you can know.” They still did not understand.
“You only see the seed,” I said unto them. “You only see the part. You have removed the seed from the tree.“ This profoundness did not yet sprout. “The tree too is More. It is more than its leaves and branches and roots.” I let this grow.
“Behold the mighty Solitary Tree,” I enfolded that soulful giant into the embrace of my heart, where the angels now did live. “How many seeds has the Solitary tree produced in the ages it has stood here?” I demanded. “Countless,” said the angel to my left. “Innumerable,” said the angel to my right. “Yes,” I said, “More. Yet here it stands, alone.” Their eyes widened. The obvious is not always obvious, even to angels. They too have to learn.
“Yet you also have come from elsewhere. You are not from here. You have seen other trees. Many. Doubtless you have seen the children of the Solitary Tree.” The heavens did then drench us as that mighty heart did weep. “Yes,” the angels nodded. “It is so,” they confirmed in unison.

“We see only the seed,” I said again. “We think it is all about the seed. But, I ask you, what does it take to produce this tiny Gift?” I did not let them answer. “Consider your action, your small insignificant action of taking a moment to be with an Ancient One waiting by his Grave. It is a result of you. Yet, what produced it?” Again I did not let them respond. “Your act of largesse comes from you. From the *All* of you.”

“Ah…” I breathed, “So it is with your small act. It connects me to the all of you.” Their eyes widened again. “Yet that is not all there is to this,” I promised them once more.

I closed my hand around that splendid consequence. “Come,” I bade them. “It is time. My waiting is over.” I did lead them to my grave, where I did lie down. “Please cover me,” I requested of the angels. Their solemn nods did send me to my treasured sleep. 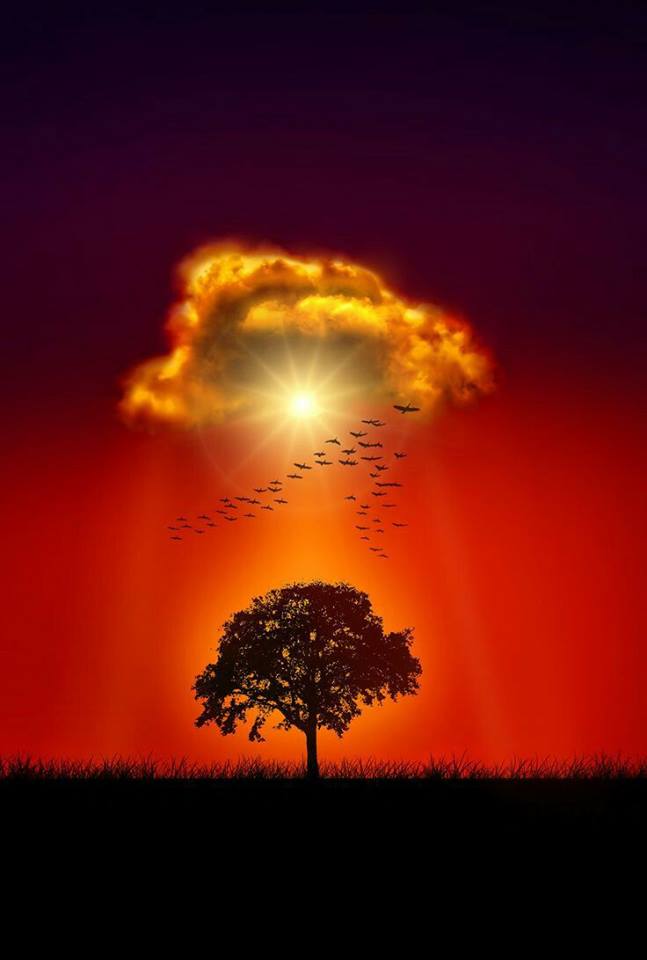 The angels had said they had seen my children. The children who are me. The children I have never seen. They were angels. They could not lie. I had Trust. It was all I could do. Trust my children grew. I knew not where, I knew not how, but I had to Trust they grew. 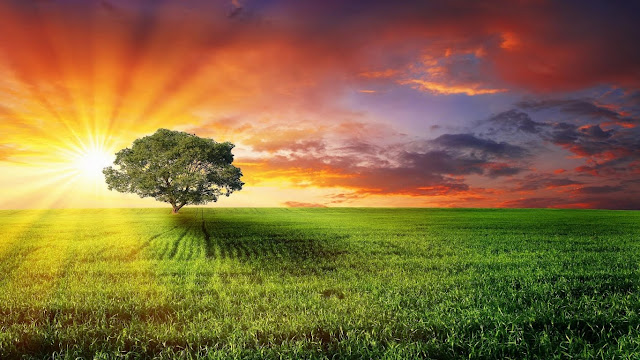 *
Biella had been climbing up a narrow stair-path cut into the cliff. They came now to a wider area near the top. A viewing vista cut into the rock. From this enclosure they peered over the surface onto the great plain. The Solitary Tree arose majestically from that exquisite expanse, filling their eyes. It was all they could see where rock did not block their view. That vast empty plain, the Solitary Tree, and a bench.

They stared at the Solitary Tree. The marvel of its existence magical.

The enclosure was open only on the side of the bench and the Tree. Rock walls behind and to the sides. To the right a small path cut deeply through the stone. Biella led them along it. Once more rock shielded their view. This path opened into another vista.

“Wait,” said Biella, holding up her hand like a field commander. “Prepare yourselves,” she instructed without explanation. Then stepped into the vista, facing the plain. The view opened up to now show *Two* mighty Trees.

“Behold,” smiled Biella, “The Solitary Tree. And, the Ancient One.”

– From: Tales, Myths, and Fables of the New Nobility (Recent entry) 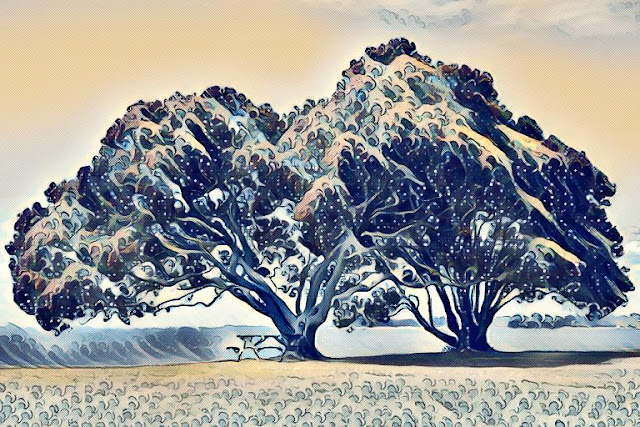